Tomorrow is February 2, Groundhog Day. Do you remember the Bill Murray and Andie McDowell movie by that name? 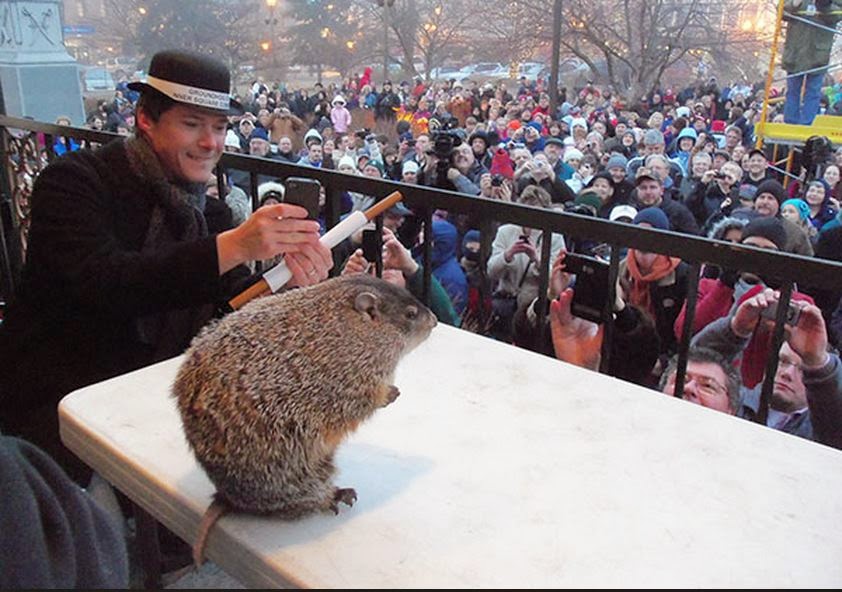 It's one of my favorite Murray comedies. I loved the premise of Murray's adventures with Puxatawney Phil repeating over and over, but only he is aware of it. However, as I got to thinking about the movie and the whole "Phil predicting the weather by seeing his shadow" gig, I got to wondering about a couple of things.

One is the weather. If it's February in Pennsylvania, why do most of the scenes in the movie have very little snow? Half the people aren't wearing gloves and it appears to be a balmy 40 degree day. Here in Michigan, we're buried in snow, so shouldn't they have more than the spattering shown in most scenes? After all, Murray and his team were supposedly stuck in Puxatawney due to a blizzard. Perhaps it's because the movie wasn't actually filmed in Puxatawney, PA. It was shot north of Chicago in the town of Woodstock, IL, which is near the Wisconsin border. Given the weather around the Great Lakes, however, shouldn't there still be more snow?

Another thing I wonder about is why Murray's character is named Phil. Isn't that kind of confusing since the groundhog's name is also Phil? Did the scriptwriter intentionally do it, maybe to point out how futile life is for the groundhog, too? After all, year after year, the poor critter gets dragged from his warm burrow, sees his shadow then gets put back to hibernate some more. Or did the writer just draw a blank when it came to other male names?

The movie never tells us why Murray is caught in the time loop, anyway. The movie also never says exactly how long Phil (the reporter not the groundhog) is trapped in it. We see him go through denial, anger, suicide attempts, etc. before finally learning from his experience and trying to help others. He also learns to speak French and play the piano proficiently. Those things would take more than a month or two.

According to the DVD commentary by director Harold Ramis, he believes 10 years pass. However, later, in answer to a an email sent to a magazine, Ramis says, "I think the 10 year estimate is too short....allotting for the down time and the misguided years he spent, it had to be more like 30 or 40 years."

Thirty or forty years? Wow! Wouldn't clothes have worn out? Wouldn't he have aged? Wouldn't the others? There seems to be a lot of unanswered questions.

Apparently the industry didn't think so. The film is regarded as a contemporary classic. In fact, the late Roger Ebert revisited it in his "Great Movies" series. After giving it a three-star rating in his original review, Ebert acknowledged in his "Great Movies" essay that, like many viewers, he had initially underestimated the film's many virtues and only came to truly appreciate it through repeated viewings.

The film is number 32 on Bravo's "100 Funniest Movies". In Total Film's 1990's special issue, Groundhog Day was deemed the best film of 1993. Pretty wild considering that year saw the release of Schindler's List, The Piano, and The Fugitive. The Writers Guild of America ranked the screenplay #27 on their list of 101 Greatest Screenplays ever written. In 2009, American literary theorist Stanley Fish named the film as among the ten best American films ever.

Okay, I agree it was a cute movie. I admire Bill Murray's talents, like Tom Hanks, Murray can portray comedy as well as drama. But one of the TOP TEN MOVIES EVER? I think that's a bit over the top. But maybe I missed something. I think I need to go watch it again. How about you?

Better yet, I'd like to curl back up in bed and hibernate until Phil (the Groundhog) stops saying we'll have six more weeks of this snowy and cold weather. Florida, anyone, anyone? Buehler?

See you later,
~ Stephanie
Posted by Stephanie Michels, author at 6:33 PM No comments: