Over the River and Through the Woods..... 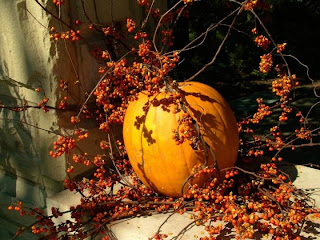 For most of my adult life, I've worked in retail. Thanksgiving to many of my colleagues means Black Friday and the start of the Christmas rush. But for me, Thanksgiving is something far more special.

The very word Thanksgiving evokes an image of my Mom in the kitchen with a frilly apron covering her dress, basting and stirring, preparing a feast.

Unlike the song, we didn't go "over the river and through the woods to Grandmother's house" for Thanksgiving. Instead, our house was the gathering place for most holidays. My parents' doors were always open to friends, neighbors, and my grandparents when the weather allowed them to make the long drive from Ohio.

The preparations were marvelous. The good china and crystal had to be carefully washed and dried then my sisters and I would set a festive table with linen tablecloths and fancy napkins. Every year, we'd make a special centerpiece of colorful leaves and flowers and would design homemade place cards for each of our guests. I shudder to think what some of those "masterpieces" must have looked like, but Dad and Mom always praised them as the cleverest and most beautiful they'd ever seen.

Delicious aromas wafted through the house -- sage dressing, roasting turkey, pumpkin pies and fresh rolls baking. Dad would open the record player and put on a favorite Christmas album. That was the first time we'd hear the carols since we'd packed the records away the previous January. While we worked, we sang along with more enthusiasm than harmony, but somehow it all seemed perfect.

In a short while, our guests would arrive. Favorite dishes were added to the already groaning table. Dad would pour glasses of sugary-sweet Mogan David Concorde Wine so everyone could join in a toast. Even the little ones got to have a small taste of wine, and we thought we were so very grown up. It wasn't until I was an adult that I discovered there were far tastier varieties of wine, but I still smile whenever I see that familiar bottle on the shelf in the store.

At Dad's signal, everyone would take their places around the table. It wasn't uncommon for us to host 20 or 30 guests. Mom and Dad weren't wealthy. They were just average, middle class Americans, but there was always room at their table for others. Before eating, Dad led us in Grace then asked everyone to share their reasons to be thankful as we passed dish after dish of holiday specialties.

No one wanted the day to end. Since there was no school the next day, the fun continued well into the evening. The littlest ones would be put to bed in one of the bedrooms while the older kids and adults played games or watched a Christmas program on TV. The party would finally break up around 9:30 or 10:00. Each departing family would get a parcel of leftovers home to take home with them, too.

Dad has been gone now for almost 35 years, and Mom recently had a stroke that put her in a nursing home. However, the hospitality and love they extended to others is a legacy they passed on to their children and grandchildren.

So, this year, we'll gather with my family at my oldest son's home on Thanksgiving. Everyone will bring dishes to contribute to the celebration. We'll laugh and hug, eat and visit, and hopefully make happy memories for the next generation.

But there won't be any Mogan David...at least I don't think so.

My Thanksgiving Wish for you...
May your stuffing be tasty
May your turkey be plump
May your potatoes and gravy
Have nary a lump.
May your yams be delicious,
And your pies take the prize
And may your Thanksgiving dinner
Stay off your thighs!

There's Just Something about an Accent

I recently returned from a wonderful trip to Montreal, Canada. Although, it was primarily a business trip, I got to visit a lot of the city and fell in love with its culture and antiquity.

Montreal is actually an island named for the triple-peaked hill, Mount Royal (or Mont Réal as it was spelled in Middle French,) that lies in its center. The area is estimated to have been occupied for at least 2000 years before the arrival of Europeans. The French explorer Jacques Cartier found a village of over a thousand St. Lawrence Iroquoians residing on the island when he arrived in the area in 1535. It has been continuously occupied since and is now the second largest city in Canada.

Although modern skyscrapers, hotels, and casinos can be seen across the the island, Montreal has managed to maintain its air of antiquity in the older quarter of town. There, many of the older, European buildings are historic sites and the government has forbidden any changes to their facades. Developers are able renovate the insides of these edifices -- sadly many have been gutted completely to build new offices and condos-- but their outsides preserve the look and feel of this very old French city.

Thankfully, I didn't need to rely on my four years of high school French to navigate the town as many of the residents speak English. In fact, even though French is the official language of Montreal, in some quarters of the island it is treated as a second language with English taking the primary spot. Still, I had a ball trying to translate signs and newspapers while I was there (I'd forgotten how much I loved the language). If I couldn't decipher something, there always seemed to be someone handy to to translate for me.

Why is it that even directions to the taxi stand sound romantic in that wonderful French-Canadian accent? Especially when the man giving the directions looks like Gerard Butler. Yummy.

I definitely need to go there again!

~ Stephanie
Posted by Stephanie Michels, author at 8:39 PM No comments:

On Pirates and Piracy 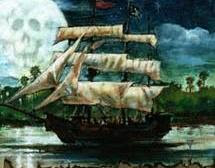 Movie characters like Jack Sparrow and Rhett Butler are sexy as hell. There are some pretty memorable pirate/heroes in romance novels, too. I can also get on board with pirates as literary villains. Who can forget the infamous Long John Silver from "Treasure Island"?

However, I have nothing but loathing for the latest incarnation of pirates, the Internet Pirates. These pirates upload eBooks or music to their sites then offer free downloads to anyone with Internet access.

In the last couple of years, the FBI has begun to crack down on these sites, covering them under the blanket of Internet theft. A person found guilty of downloading a pirated eBook or song can be given "up to five years in prison and a fine of up to $250,000." That's per occurrence -- which should make those "free" downloads look a little less appealing.

Unfortunately, the threat of fines and prison doesn't stop the flow. The owners of these sites claim they aren't responsible, they didn't upload the eBooks or tunes themselves. Users did. Some of the sites may even post vague warnings about copyright infringements. But none of the sites monitor what's uploaded or remove it unless directly confronted by the owner of the copyright.

So the piracy continues, because a large majority of the downloads are done by teens and others, who don't read the fine print. Or they think, if it's offered on the Internet, it must be okay since there was no warning posting on the website about downloading being illegal. It just said that uploading copyrighted items without permission is a crime. Besides, what's the harm in one little download?

Well, it could earn you a five year vacation in a Federal penitentiary and a quarter million dollar fine. Harsh you say?

Consider this, in a single day those free sites (I won't give them credence by naming them) give away hundreds of copies of a single eBook title that some author has spent long hours sweating over to bring to life. These downloads can easily surpass in a single day what the authors will be paid for a month's worth of downloads from their publishers' legitimate sites. Would you like it if you worked a whole month but only got paid for a day's worth?

Those illegal downloads rob the authors (or artists in the case of music downloads) of the legitimate commissions they are due for their hard work and talent. If that amount exceeds $500, it's called a felony! Those commissions are their paychecks, folks, and anyone who downloads a pirated eBook or tune is stealing. Why else would they be called "pirate sites"?

So, while others may be shocked over the courts recently fining a Minnesota woman $222,000 for pirated music she made available to others for downloads, I stand up and cheer. I say keep up the good work, FBI. Go after more of these pirates and the users, too, because the sites wouldn't exist if there were no users.

This might sound harsh, but the subject is one on which I take a firm stand. It's personal to me since I have so many friends who are authors of eBooks and are being robbed each and every day by pirate sites. These are everyday folks not millionaires living in big mansions and driving luxury cards. And even if they were, it would still be a crime!

There's another more invidious side of Internet piracy that worries me, too. It's hurting our kids! In our techno world, kids are online all the time. Piracy is blurring the line between right and wrong for them. It's delivering a message that it's okay for people to help themselves to whatever they want, and that they aren't culpable, because they didn't actually steal the song or book from a store, all they did was download it!

Is that the message we want to give the next generation?

Parents need to discuss piracy with their kids. Drive it home to them that these downloads are a crime. Monitor the stuff their kids download on their computers. If they find pirated music or videos, make the kids delete it. Block the pirate sites. Another way to make kids realize the seriousness of the crime is put in terms they understand. Talk to them about adult wages then have your child figure out how many years it would take at the various wages to repay a quarter of a million dollar fine. If they get an allowance, tell them you will fine them the full retail price of any download they make.

Do whatever it takes. If your child gets mad at you, too bad. Parenting isn't a popularity contest.

Schools can help, too, by stressing in computer classes that piracy is a crime, and those songs the kids may be sharing with their friends could result in jail terms and fines.

It's not a message that can be delivered once then forgotten. Not when the temptation is always lurking out there.

Okay, I'll get off my soapbox now.

Talk to you soon,
~ Stephanie
Posted by Stephanie Michels, author at 6:41 PM No comments: